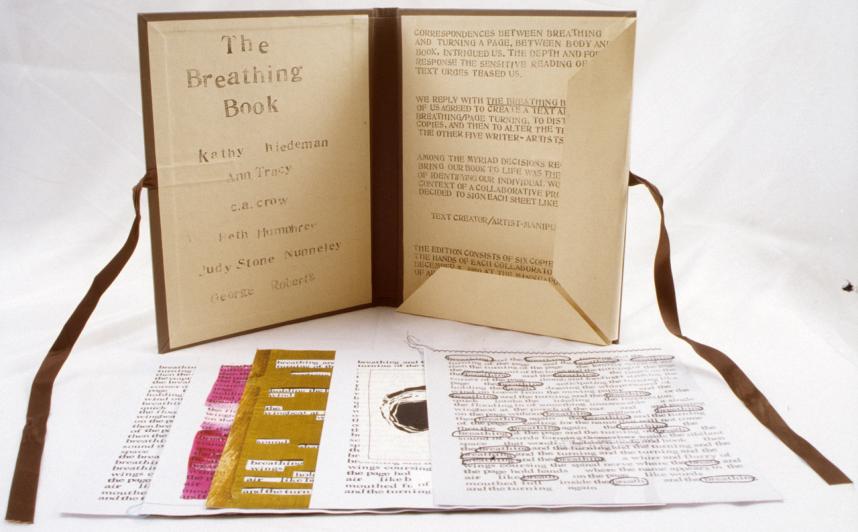 The Alchemy of Language:

Outdoors with timed entry into galleries every 30 minutes

Outdoors with timed entry into galleries every 30 minutes

A poet, educator, visual artist, and proprietor of Homewood Studios and Gallery in North Minneapolis, George Roberts has spent the past sixty years loving the written word and finding ways to push it out into the world. In 1990-91 Roberts discovered ways to give visual form to his poetry when a sabbatical from teaching literature and writing at North Community High School provided him with time to enroll in classes at MCAD. The courses in printmaking, paper making, letterpress printing, drawing, and artists' book making led him to establish in 1993 his own DownStairs Press, which was initially housed in a small room at the back of his basement.

The Alchemy of Language provides an overview of the numerous letterpress-printed books and broadsides, altered books, and collaborative print projects that Roberts has produced over three decades. One of his earliest class assignments, The Breathing Book (1990), introduced Roberts to the community-building nature of the print medium. Since then Roberts has seen art making as both a journey through personal history and as an invitation to collaborate, to hold conversation. These twin proclivities have widely shaped the form and content of his work.

The transformative processes of giving shape to language, as a poem or a container in which to house it, are similar for Roberts. Writing letters on a page, the setting of type, the hand making of paper, and the binding of books all require a deliberateness, a slowing down, and a superlative attention to detail, all skills honed over years of practice.

About George Roberts and Homewood Studios and Gallery

Roberts earned his BA degrees in English and French Literature at St. John's University and a Master of Arts in Teaching at the University of St. Thomas. A longtime resident of North Minneapolis, Roberts was a high school teacher for thirty-two years, teaching literature and writing and a practicing poet. After retiring from teaching in 2000, Roberts turned his focus to building an arts community in North Minneapolis. In 1998, he and his wife Beverly purchased a neglected 1920s building that was once a grocery store, and turned it into Homewood Gallery and Studios. The small community gallery and space for practicing artists opened in January 2000, and currently houses five studios with eight resident artists. In addition to hosting twelve to fifteen exhibitions a year, Homewood hosts a bevy of activities, from tai chi and drawing classes to music events and poetry readings. Despite the Covid-19 pandemic, the Homewood exhibitions have continued; they are featured in the large gallery windows and the artist talks have moved to an online format.