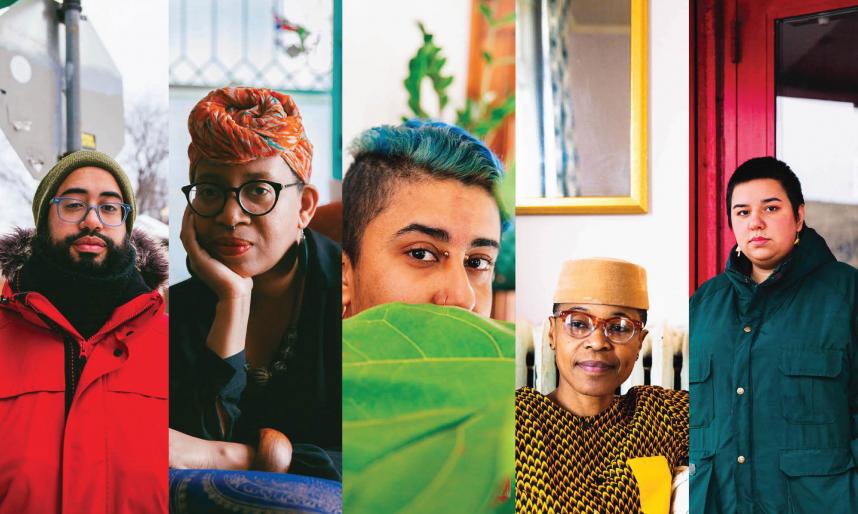 The Letter Formally Known As Q:

Voices from Minnesota’s Queer Immigrant Community
This event has been cancelled or postponed. Check back in the near future for more information.
Exhibition:

The Letter Formally Known As Q is a multimedia oral history and archival project documenting the narratives of queer/trans immigrants of color and their personal experiences of migrating, growing up, and making home in the Twin Cities. Focusing on the root causes of mass migration and displacement around the world, particularly the role of U.S. foreign policy, this series maps the lived experiences of queer and trans immigrants of color and the ways in which their bodies are policed, censored, and surveillanced on a daily basis.

Through individual interviews and portrait sessions, subjects share their unique perspectives on queerness, citizenship, and justice to envision a world without “borders”—the social, political and geographical constraints that prevent individuals from exercising full agency or autonomy to exist. Ultimately, the project’s central goal is to produce an accurate public record of individuals who have reclaimed space for themselves in the Western World and to build evidence for others who would have been erased or forgotten in their journeys toward freedom.

Nancy Musinguzi (they/them) is a visual artist, freelance photographer, and visual anthropologist working and living in Minneapolis. Over the past fourteen years, they have dedicated their visual art and social-engagement practice to documenting contemporary American life, culture, community, and social movements through a Black queer immigrant lens. With a background in photography, activism, and cultural anthropology, Musinguzi blends traditional and experimental approaches to visual storytelling that represent individuals and their communities with dignity, attentiveness, and respect. Their artistic style is heavily influenced by hip-hop and punk culture—raw, bright, unapologetic and unconventional—blended together to immortalize their subject’s truth, or “realness.”

Applying the ethics used by anthropologists in their fieldwork and ethnographic research, Musinguzi uses their creative practice as a tool to engage the public in dialogue around critical issues (i.e., racial and economic justice) that are difficult to grasp or ignite without art. Since 2014, they have installed solo and group exhibitions across the nation, and guest curated gallery shows in collaboration with mid-career and emerging artists, non-profit organizations and foundations, private and public universities, high schools, and grassroots and community groups. They have also self-published eight photography books, most recently, The Letter Formally Known As Q, in 2018.