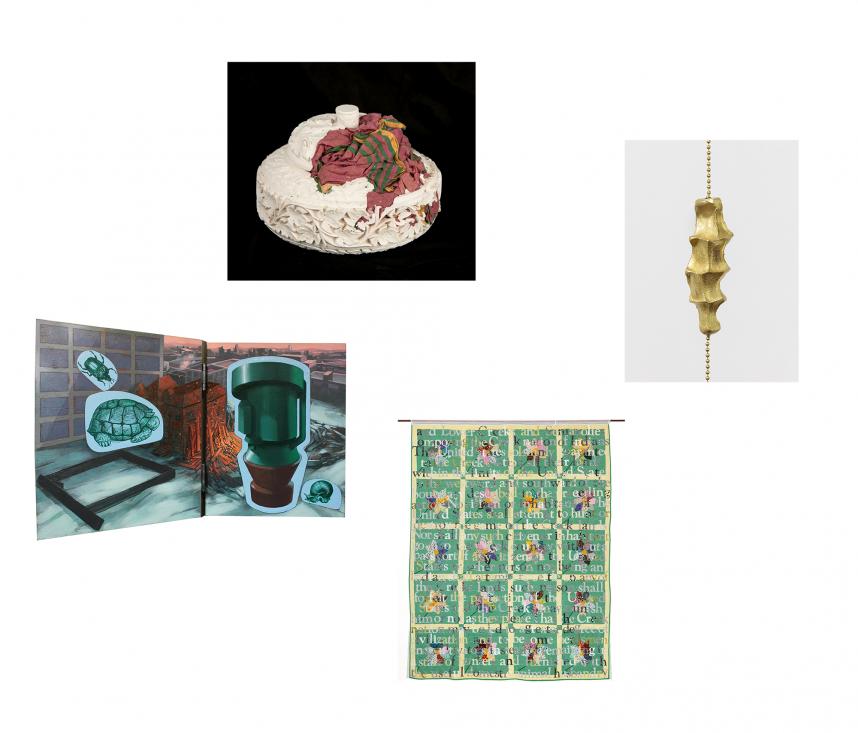 The artist’s story is a complex one – a personal metaphor, told through objects, about how one encounters the world with all its tenuous layers, fragility, and complicated histories. The setting begins in the fleshy mounds of the palms that hold threaded needles, wooden handles, wet plaster, and pressed clay. It is from this small space of the body where mighty images are willed into being.

This group exhibition brings together the diverse practices of four artists Gina Adams (Vancouver), Megan Pahmier (Brooklyn), Nirmal Raja (Milwaukee), and James Stephens (Chicago). Each work tells a story about the intelligence of the hand. Through a considered and methodical construction of objects and spaces, each artist imprints materials with their presence. The exhibition explores not only how these artists use material as a conduit for meaning but also considers the phenomenological experience of the maker and varied strategies of artistic production. Adams cuts and severs antique beddings then meticulously reassembles them to reconcile and heal a brutal history. Pahmier squeezes and pinches clay, embedding her hand print and coating her grip in brass to soothe the confronting gesture of the body. Raja memorializes and casts her grandmother’s cooking and serving wares by interjecting colorful sarees that once wrapped the body. Stephens invents and builds enigmatic worlds with visceral accretions of color that teeter between the imagined and tangible.

The work presented in Four Stories speaks in the language of materials where making and meaning are tightly connected. Adams, Pahmier, Raja, and Stephens write their narratives with a material consciousness, passing them down to us so we, too, may encounter our complex and shared storylines.

Gina Adams' cross-media, hybrid studio work features the reuse of antique quilts and broken treaties between the United States and Native American tribes, sculpture, ceramics, painting, printmaking, and drawing. Adams received her BFA from the Maine College of Art and her MFA from the University of Kansas. Her work has been exhibited extensively throughout the U.S. and resides in many public and private collections. The noted international art critic Lucy Lippard wrote the introduction to Adams’ 2015 solo exhibition Its Honor Is Here Pledged, which launched her art career and body of work Broken Treaty Quilts into a new contemporary art arena. In 2016 Adams was a Smithsonian Artist Research Fellow, and had Its Honor Is Hereby Pledged exhibition in Boulder, Colorado at Naropa University’s White Cube Gallery. In 2017 Adams presented and exhibited at the AIW Conference at Goldsmiths College, University of London, England, followed by an exhibition at the Bemis Center of Contemporary Art titled Monarch’s curated by Risa Puleo. In 2018 Adams was Artist-in-Residence at Dartmouth College and a Kohler Arts Industry/Residency. Adams currently lives in Vancouver and teaches at the Emily Carr University of Art and Design.

Megan Pahmier lives and works in Brooklyn, New York. She received her BFA from the Maryland Institute College of Art and a MFA from Hunter College. Recently, she was awarded an Artist Fellowship at A.I.R. Gallery in New York, where her work was featured in the solo exhibition, Slow Motion. Pahmier’s work has been exhibited at The Knockdown Center, Essex Flowers, Dutton and TSA galleries in New York as well as Vox Populi in Philadelphia and The Luminary in St. Louis. She has shown internationally at Peana Projects in Monterrey, Mexico, and The Old Hairdressers in Glasgow, Scotland. Additionally, she has been awarded fellowships at Vermont Studio Center, Byrdcliffe Art Colony, the School of the Art Institute of Chicago, and Socrates Sculpture Park.

Nirmal Raja is an interdisciplinary artist living and working in Milwaukee, Wisconsin. Raja received a BA in English Literature in India, a BFA in painting at the Milwaukee Institute of Art & Design and her MFA in painting and drawing at the University of Wisconsin Milwaukee. She maintains a studio the Marshall Building in downtown Milwaukee. Raja has participated in solo and group shows in the Midwest, nationally and internationally. She is also a mentor in the Milwaukee Artists Resource Network's mentorship program. Periodically Raja curates shows and organize collaborations that address notions of intersectional identity, migration, disenfranchisement and marginality. The recipient of several awards and grants, Raja recently awarded the Graduate of the Decade Gold Award from the University of Wisconsin-Milwaukee Alumni Association and a grant from the Mary L. Nohl Suitcase Export Fund.

James Stephens is a Chicago-based painter and sculptor known for his images of urban decay that often include invented still life objects and symbols. After receiving a BFA from the College of Creative Studies in Detroit in 1982, he had his first one-person show in 1988 which launched many other exhibitions in the Midwest. In 2007 he had a mid-career retrospective at Oakland University in Rochester, Michigan. This past year, Stephens was part of the Evanston and Vicinity Biennial at the Evanston Art Center in Illinois. His work is included in many private and public collections including the Detroit Institute of Arts, Wayne State University, and the University of Wisconsin Whitewater.